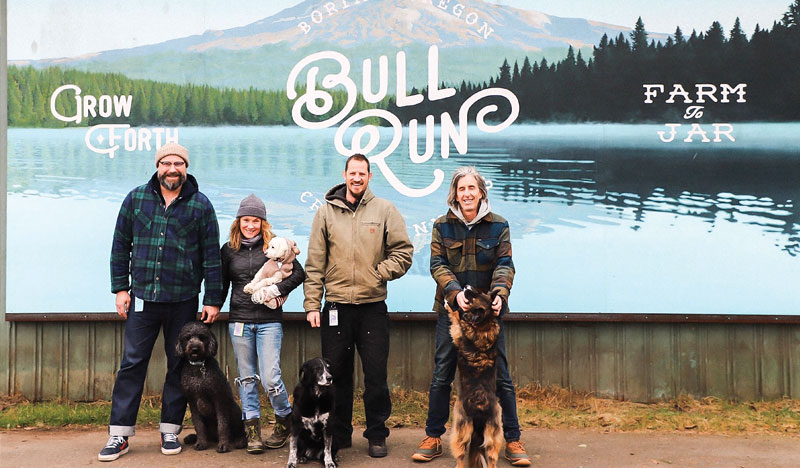 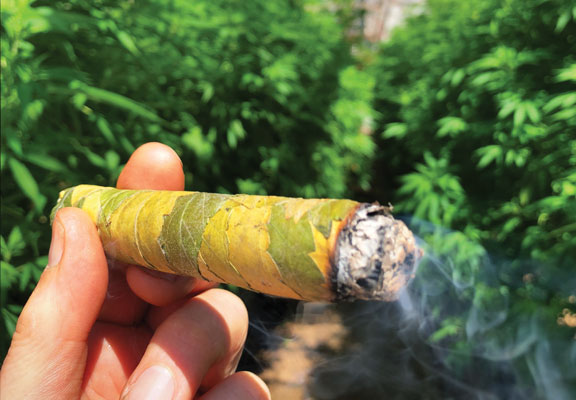 In 1973, Oregon became the first state to decriminalize cannabis. That didn’t quite make cannabis legal. Possession of small quantities was still a violation (not a crime) punishable by a fine. Oregon was also among the first states to authorize its use for medical purposes. Today, cannabis in Oregon is legal for both medical and recreational use. In 2014, a bill was passed legalizing non-medical cultivation and use of marijuana and shortly afterwards, marijuana sales became legal to recreational users from licensed dispensaries.
Sailing down the Columbia River one day, John Plummer and friends were discussing the relative qualities of local ‘produce’ and in particular the excellent product home-grown locally by one of their friends. Plummer had been working on his friend to turn his talent into a business for some time. So, when legalization came along, John, with ‘master grower’ Mike Scarbrough and friends, formed Bull Run Craft Cannabis and received one of the first licenses granted by the state for cultivation, in January 2016.
“We applied and had our application done within 24 hrs (it was a lengthy application). We were in the first group of seven producer licensees initially granted by the state. At that time the only licenses being issued were to producers because the state wanted to give new license holders the necessary time to build the infrastructure, initiate inspections and pass all the county and state cannabis building and compliance codes and then start growing the product to hopefully bring it to market in six months, when they planned to have issued licenses to the wholesalers, processors and dispensaries. It was an insane timeline and a hell of a lot of work. There were so many unknowns in a brand new industry that was only legal in a few states. Looking back on it and knowing what I know, I would never take the risk now. We were all a little crazy.”
Nestled in the shadows of Mount Hood, Bull Run Craft Cannabis’ award-winning ‘flower’ is grown on a lush plateau at the confluence of the Bull Run river - a watershed for the region. All its product is Certified ‘Kind,’ meaning they use sustainable cultivation practices with minimal environmental impact and cultivate without the use of pesticides, synthetics or salts.
They consider themselves part horticulturists, part craftsmen, only producing the most flavorful, natural and potent buds. That craftsman approach is a particularly ‘Oregonian’ thing. Drawing on his past experience as a bar owner and nightclub founder, John likens his business to the craft brewing and wine production industries that exploded out of Oregon in the 80s and 90s, both internationally renowned for their quality and craft.
“Good bars offer choices. Most cannabis retailers are realizing they can’t just sell mediocre product to consumers. There are so many dispensaries in the state right now it’s wild. There’s plenty of ‘Bud Light’ weed out there, the business is awash with poor product. Large investors have spent billions to buy in to some giant producers in Canada, but the product is terrible, output from mega factories. Canadians shop here in Oregon, and just swoon over the product. There’s a big thing about Oregon that small growers are banking on. Oregon is known for having amazing wine, creating the craft beer scene, and cannabis is right there ready to happen as an Oregon craft product.”
It’s been widely reported that states are raking in tax dollars from the businesses selling and producing cannabis, but the reality for producers and sellers has been a bit of a rollercoaster.
“I’d be lying if I said I didn’t think initially this was a good racket to get into, but state by state, the situation is so different. Every state had growing pains, and Oregon’s had some all of its own. Initially the state planned to limit the number of licenses and also only issue them to in-state residents, but the rules were relaxed and they removed all restrictions. They decided to let the free market rule, which would be great with any other industry, but until the federal government legalizes cannabis nationwide, we can only sell within our own state borders. With just over 4 million residents in Oregon and 1 in 10 consuming cannabis, its a small marketplace and extremely competitive. According to state reporting, there is more cannabis produced in Oregon than can legally be consumed in 6.5 years. The overabundance of supply drove prices down for a long time. Customers loved the cheap prices, but a lot of growers went out of business or switched to hemp production (similar plant, different end products and lower THC content). When the price downturn first happened, we didn’t pay ourselves for over a year. By the fourth quarter, with no change and prices still at rock bottom there was a time, a moment or two when I wondered ‘do I want to stick this out?’ But I’m glad I did. The market came back, slowly but surely, and then we started really focusing on the product line. If flower prices are rock bottom, I want to create products that are unique, and well made. High end, high profile products. We have a good grasp on the top shelf market, in arguably some of the best dispensaries in the state.” 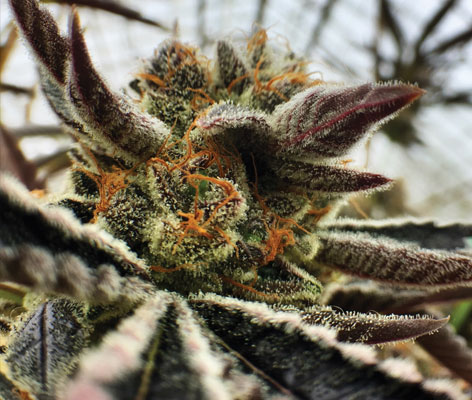 John lives in the city of Portland and spends a lot of time out on the farm in Boring, Oregon. I asked him about the transition from bar and nightclub owner to farmer.
“Growing an agricultural product was a big transition. Not my strength. I grew a couple of plants with a fish tank light in high school in my closet. I didn’t know what I was doing and don’t claim to be proficient in that area. I have amazing business partners who are super talented in that area. My strength and focus is product development, marketing and expansion planning. Right now I’m focused on branding, marketing and press, all of those things I can do better in the city. The original grow site in Boring, Oregon is a beautiful 60-acre historic farm owned by a friend that used to grow organic vegetables. Within the existing farm structures we licensed an old barn to use as our first grow site.”
The fact that the business can only sell product in its own state at the present time is a significant limit on growth of the business, but John and many other local growers remain hopeful that when it becomes legal to sell across state lines, they will be ready for it.

“Supply is better balanced now. Many producers switched to growing hemp which is legal to grow and sell nationally, or simply went out of business. Natural selection that happens within any marketplace. When prices plummeted, we responded quickly and downsized our whole operation. It was during that period starting in mid 2018 that I started to develop our ‘Cannagar’ and pre-roll products. Market awareness takes time and investment, and luckily these unique and branded products were a hit and we were able to carve out a niche with ‘top shelf’ consumers. Now that the flower market has heated up again, we’ve started up a new licensed grow operation just a few miles down the road from the original. Our new 20,000 sq. ft. building is designed and built specifically for our growing methods and requirements. 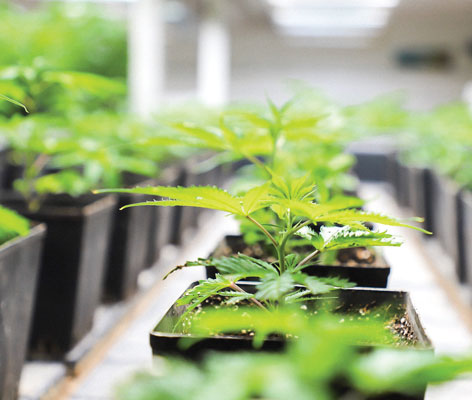 Six years ago if you wanted to buy weed in this town or any other in Oregon you’d go to your local black market dealer. You’d hand over your $40 and get a baggie of who-knows-what-the-fuck-is-in-there. It could be great or full of pesticides and awful. Today, you walk down to your local dispensary — there are more dispensaries in Oregon than Starbucks and McDonalds outlets combined — and with the help of a good licensed ‘budtender’ to guide you, there are usually 40-50 different choices of bud to choose from and countless hybrid strains all with different flavor profiles.

It’s all about the terpenes (a naturally occurring oil in the cannabis plant). Most people know about how the THC (Tetrahydrocannabinol) content of a plant equates to, well, a higher high, but we focus on developing products with a balance of high terpene and THC content. The high THC thing is such a joke. THC will definitely get you high, but if you want to steer that high into a certain direction, you want to pay attention to the terpenes, and a higher terpene profile is much better. It’s a beautiful thing. Atmosphere, soil, drying, tending, so many ingredients play a role. You can grow average product anywhere but we can grow outdoor and indoor amazing product here. You can smell the difference.” (He demonstrates).
“Oh baby, there we go! The nose knows.” 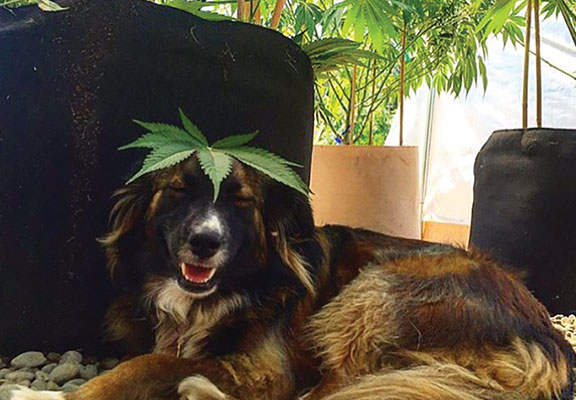 To find out more, visit bullrunncraftcannabis.com. To experience the full article, buy Been Magazine issue #3, Spring 2020.