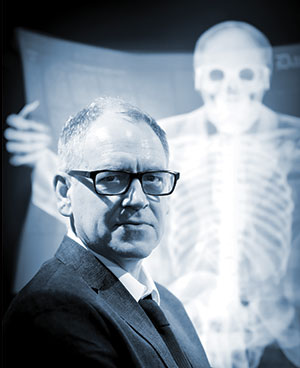 Surrounded by Areas of Natural Beauty in rural Kent, just about two hours from the heart of London, Nick Veasey is talking to me from The Process Gallery, Nick’s studio, x-ray lab, darkroom and contemporary art gallery. The gallery itself has won architectural awards, and serves as a showroom for Nick’s incredible work as well as exhibiting other contemporary artists. It’s a great example of Nick’s approach to his work, technically brilliant, consummately creative and anything but the norm.

Passionate about photography since he was a child, Nick is entirely self-taught. He’d worked in print shops and in advertising agencies for some years before he began to develop a photography portfolio, just at the beginning of the digital era. He loved experimental work, so much so that his portfolio rarely contained anything that was recognizable. It “had to be so weird that you didn’t know what it was.” It didn’t really deliver much in the way of work until his then girlfriend Zoë (now his wife), while working for a television show called The Big Breakfast, told him they wanted an x-ray of a cola can, and he had just 24 hours to do it. 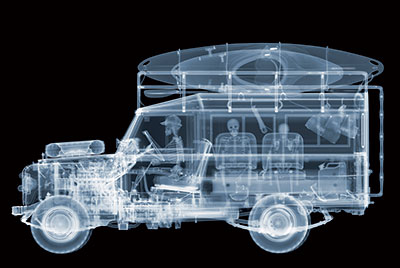 Up for the challenge, Nick telephoned a hospital, where his request to use their x-ray machine was politely declined. He then discovered that there was another field of x-ray in industry, called non-destructive testing, which is used to inspect the landing gear of aircraft, for example. He found a commercial x-ray company and rented their equipment for a day.

“I was instantly hooked, I took six months off, borrowed some money from my mum, got a portfolio of x-ray films together, then started going round seeing art directors and ad agencies. They loved it. It created ideas, so I knew there was a market for it.” 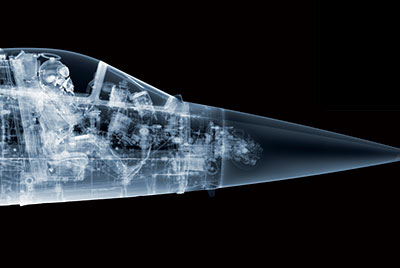 He’s now been doing it for 25 years. “I wasn’t a big name photographer who’d done it before. I just started, I didn’t own any of the equipment, we used to hire it. We ran the business from my spare bedroom in a rented house, but it didn’t last.” Then came the call to x-ray a full size plane. X-raying an entire plane was technically impossible. His wife suggested that they send a fax with a silly quote on it, if the client said yes, they’d find a way of doing it. They said, yes. “It’s the only time in my career someone said we don’t care how long it takes, we just want you to do it.”
At the Boeing manufacturing plant in Seattle, Washington, Nick used a state-of-the-art computer simulation to walk through the Boeing 777 in question, stop at a specific spot and identify all the parts required to recreate the plane in x-ray form. Over a year, Boeing shipped all the parts in containers to Nick’s rented x-ray facility, where they would be x-rayed and returned to Boeing. Essentially, Nick assembled the entire plane in cross section over the course of a year.

“It is far and away the most challenging thing I’ve ever done. If asked to do it again, it wouldn’t be quite so complicated now, technology has changed, but the best way to learn anything is to do it.” 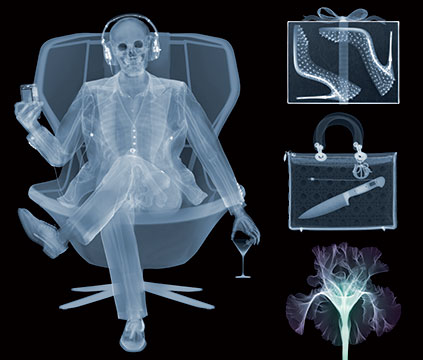 Many of the larger items that Nick x-rays, such as vehicles, can’t be done in one piece, the finished works are composited digitally. Nick and his team x-ray individual areas of the subject and painstakingly piece sometimes dozens of x-rays back together to create the final pieces. One of Nick’s recent Instagram posts showed a classic Lamborghini Miura in the process of being x-rayed. It’s a nerve-wracking procedure, with the multi-million dollar vehicle raised on a gantry for the process.

Nick recently collaborated with London’s Victoria & Albert Museum and created a series of x-rays of the garments in their fashion collection, dating from the 1600s to the late 20th Century. To achieve this, Nick constructed the world’s first mobile x-ray studio, which is proudly parked next to his studio and gallery.

“I also like creating portraits, because they get a polarized reaction. It’s the same skeleton for everything I do, we put a hat on it, turn it into a cowboy, put a dress on it, turn it into Marilyn Monroe. It’s what’s on the inside that counts, people are all the same on the inside.” The name of skeleton, incidentally, is Frida, acquired from a local teaching hospital. 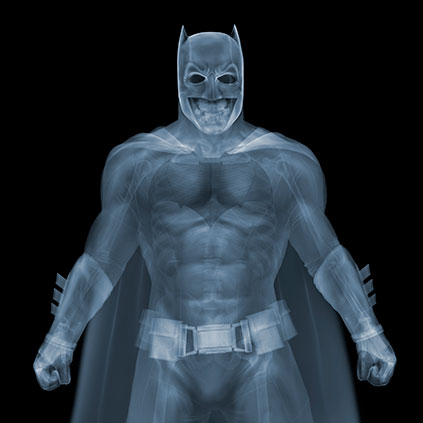 Last year, Nick had a major career highlight at Fotografiska in Stockholm, the world’s largest photography museum, where he held a 10 week retrospective visited by over 100,000 people. The opening night saw the Duke and Duchess of Cambridge enjoy the amazing x-ray images on show. In July 2019, Nick’s Process Gallery opened its second exhibition featuring Nick’s experimental pieces, including one-offs and artworks created in conjunction with the Victoria and Albert Museum.

Nick is currently working on, among many other things, a classic car x-ray project, including that gorgeous Lamborghini I mentioned earlier. His work is regularly on show at the Drang Gallery in Devon and the Bel-Air Fine Art Gallery in London. He has published a number of books of his works including Inside Out (Bokforlaget Max Strom, 2017) and X-Ray: See The World Around You (Goodman, 2013).