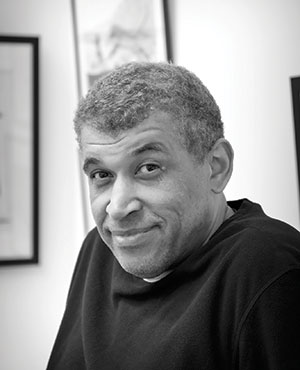 Sylvain Despretz loves film. Talking with him about the topic, you’re going to have to take notes, because he’ll regularly reel off a list of ‘must-watch’ films you’ve never heard of, but probably should have. He started making films in school, in Rochester, New York, but when he ran out of places to develop the film he was shooting due to the advent of video in the early 1980s, he switched gears.

“It shaped my career, had video not, at the time, been such low quality, I probably would have kept shooting films. It’s why I chose to go into illustration in the 1980s. I just couldn’t afford to keep making films, and the video alternative of the time didn’t cut it like it does today.” Born in and growing up in Paris, he watched a lot of films there in the 1970s. “Paris, the best place in world to watch movies. I saved lunch money to go to movies three times a week. I watched a lot of black and white movies. Then I found a book on the movie Jaws, in 1975. I saw the storyboards by production designer Joe Alves, I was already illustrating and thought, I could do that.” 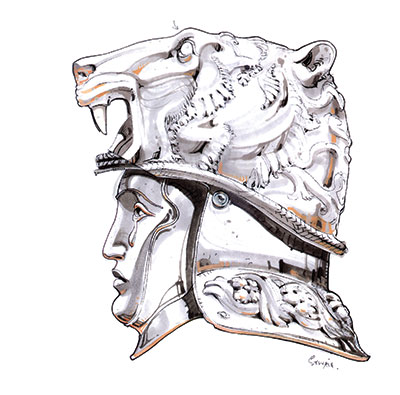 By his early 20s Sylvain was living in New York City, working in advertising when he met Ridley Scott at a Christmas party. Ridley Scott asked him “Do you ever get to LA?”

“I lied. I said I’d be there next week. So I moved to LA and he put me to work with some of his young directors. I also worked with David Fincher, and on some music videos with Madonna and Michael Jackson. By the time Ridley put me on one of his major projects, people had changed the way they perceived me and my work. The attention I got was tremendous.”

A defining time in his career is his friendship and work with French graphic novel artist Jean Giraud Moebius (1938 – 2012). He met Moebius in LA and was brought back to Paris to work with him on Luc Besson’s The Fifth Element. The critical acclaim and box office success of The Fifth Element was a big shock at the time, but it got Sylvain noticed. His experience with the detail-oriented Moebius influenced his style and approach from then on. 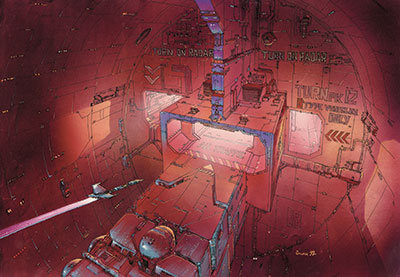 “Moebius taught me to never let people in the film business tell me what’s good and what’s not. You have to become your own barometer and approach storyboards in the way comic artists do it, taking care with every frame. To put in each frame everything you can, draw every line as if your life depended on it, because on some level, it does. There is no drawing small enough. Your love has to be the same for the face in the middle of the frame as it is for the ant on the ground or a blade of grass. You can’t approach anything with disdain.”

“I also started inking my storyboards with brush and the immediate result was the first book someone did on Gladiator, so going further than necessary paid off in reputation, my work got seen.”

Sylvain’s attention to detail, and stylistic similarity to Moebius’s work allowed him to work with Moebius on a number of projects, often filling in for Moebius himself.

“We had a lot in common including culture and film passion and metaphysics. I could draw in his style, outlining storyboards and he would finish. Together we could do a lot more commercial work, it was great practice. I spent twelve years working with Moebius, a wonderful experience.” 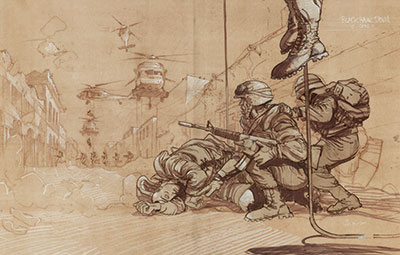 Returning somewhat to his filmmaking roots, Sylvain is currently working on an ambitious documentary project called The Desert Years, about the jazz fusion band Brand X. Formed in London in 1975, band members included John Goodsall on guitar, Percy Jones, bass, Robin Lumley on keyboards and legendary drummer Phil Collins. The documentary idea grew from a conversation with a taxi driver in Los Angeles.

“My car broke down, so I took a taxi home, the cab driver was playing some kind of fusion on his boombox. I asked if he’d heard of Brand X and he told me that guitarist John Goodsall drove a cab with the same company. The guitarist was driving a cab, the bass player was lifting furniture in NYC to pay the bills. They were extraordinary musicians, but had never received a penny from their management company, despite their albums selling for decades.”

The documentary, a self-funded passion project, has been in the making for almost two years and is slated for completion next year. Visit brandxthemovie.com to find out more about the project. Sylvain is also developing a book of his storyboard and illustration work, and regularly exhibits work at Galerie Maghen (danielmaghen.com) on Rue de Louvre in Paris.

In June 2020, Sylvain launched a Kickstarter campaign to fund a book of his storyboard and illustration work. ‘Los ángeles: songs of sirens caught in celluloid’ was fully funded within an hour of launch and is currently shipping. Visit caurette.com to find out more. 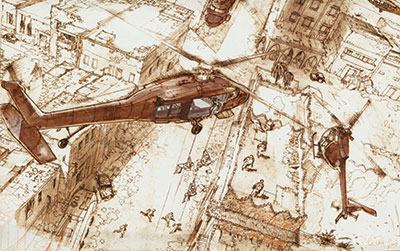 When I ask Sylvain about the future, or his immediate plans after the documentary he, of course, uses a film analogy to describe it.
“You’re familiar with the film The Poseidon Adventure? The boat has tipped over, everything is upside down. You have to make your way to the stern of the ship, where the hull is thinnest. What is up is down. A small part of ship is above water. You know you need to be there, but there really is no exit plan. What can you do? Bang on the hull! It’s all you can do, and that’s what I’m doing right now. I’m banging on the hull.”