It starts with a village 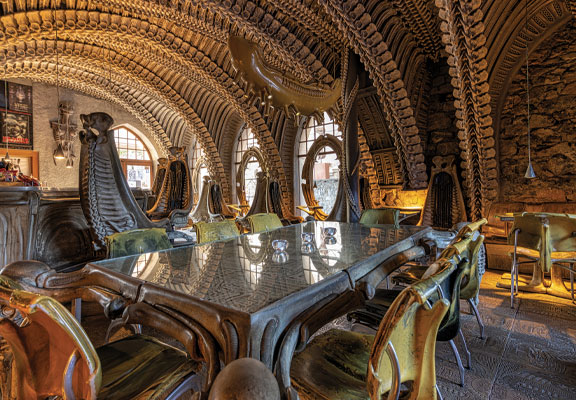 Gruyères, Switzerland. Picture-perfect medieval village on top of a hill in the rural Canton of Fribourg. As picturesque as you can get in these parts, and these are picturesque parts. It’s everything you might expect of this sort of place; lovely hiking, pleasant gift shops, a 13th Century chateau, fabulous fondue restaurants, breathtaking panoramic vistas... and then there’s HR Giger. 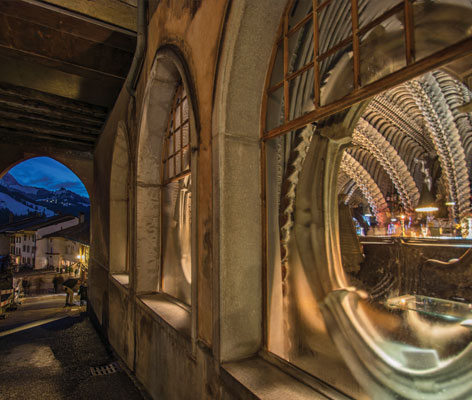 Gruyères is not just a destination for me. It’s a starting point. I first visited the place in 2005, when a friend took me on a road trip from Lausanne. On that visit, passing through the archway created by Chateau St. Germain in the heart of the village, I discovered Museum HR Giger and HR Giger Bar. I wasn’t interested in venturing further up the hill, I’d found my nirvana, my place. I never really left. It stayed with me. My photos weren’t good enough for a start, always a reason to return.

I love the sense of routine here, the fact that every night it feels like I’m the only one left in the village, because every day I watch the procession of workers and dairy delivery vans first, followed by early bird tourists, wandering up the hill from the car park down below, always a look of wonder, of bewilderment as they take in this beautiful place. Sometimes the cameras don’t even come out until they reach the chateau at the top of the hill, or pass through the tunnel that guards the idyllic village from the imagined terrors of the Museum HR Giger. Or vice versa. Then as night falls, the procession in reverse, leaving Gruyères to only the sound of cow bells in the pastures below.

Some years and numerous visits later, I still spend as much time as possible here, sometimes (though not very often) not even taking pictures, just relaxing and enjoying the quiet. I connected with HR Giger’s close friends and family here, which keeps me coming back to Gruyères and to Zürich, where I eventually moved for a couple of years. In that time, I traveled to a major HR Giger retrospective at Le Lieu Unique in Nantes, France in 2017, where I fell in love with that beautiful, creative city, too (wrote a feature about it in the first issue of this magazine). Gruyères may not be an international crossroads on the level of, say, London or Istanbul, but it has made a major impact on my life. The people I met. The paths crossed and the path I’ve followed ever since. And the stories. Such wonderful stories. Here I’ve heard stories of HR Giger’s life that opened my eyes to him as a person. Happy, humble, with a wry sense of humour, fond of sweet treats of most kinds, and as at home here in this peaceful village as he was at his studio in Zürich North (Oerlikon), the place he created almost all his major works. I only met him once, sad to say, but feel now like I’m a part of his extended family, and honored to be so.

HR Giger opened his museum here at the Chateau St. Germain in 1998 after falling in love with the place a couple of years earlier. Initially aghast at his presence (and his ideas for the museum), the village now embraces Museum HR Giger, a surreal yet perfect setting for a museum and bar unlike anything else in the world. They co-exist in a surreal harmony that feels, at first, like an odd match, but then feels perfectly at home, like it should be here.

I consider HR Giger Bar to be his last major work. It’s the ultimate in immersive art, an original and completely unique experience at once inviting and inspiring. To enter the bar or museum is to enter HR Giger’s mind. To witness his major works up close, and at full size — some pieces measuring two to three meters across — is incredible, a new experience every time. At the museum, I met Bijan Aalam for the first time, one of Giger’s oldest friends, and the first to exhibit Giger’s work in Paris in the 1970s. I asked Bijan about HR Giger’s process... 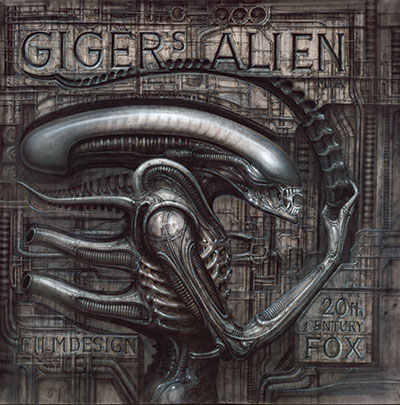 “Giger had a special way of working, mostly at night. He’d sit on his stool with wheels in his custom-made studio with a slot in the floor to allow large canvases to move up and down so he could reach every part. He’d start in the upper left of the canvas, moving down to the right without any preparatory design or sketches, and then the work would slowly appear like a Polaroid picture, all of a sudden you’d start to see shadows coming up and there was the picture taking shape. He liked to have people sitting behind him reading a book to him out loud, and jazz music playing, he loved jazz music, and he had to have this on the record player while he worked. The work was always so perfect, so balanced and often finished in the early hours of the morning, when he’d sit back and say ‘did I do that?’ like he was in a trance. He rarely left anything half finished, he went to the end of the picture, or pictures, completing all connections or links between the two, or three, as in his temples.

People are afraid of his work, but they are wrong, there’s a sense of humor in it, and so many possibilities. What makes his art so engaging is a mystery. You cannot really explain, there is always something that excites curiosity. Once you can explain a work of art, the charm is lost.”

Sadly, Bijan passed away in 2020 in St. Gallen, Switzerland. 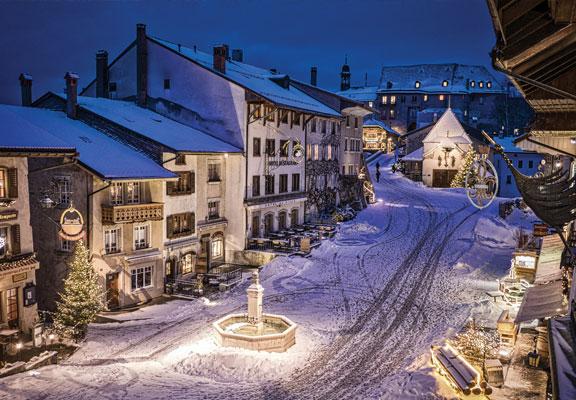 Gruyères is just over two hours from Zürich or Geneva by train or car. You can find out more about visiting there and staying there at the village’s official web site, la-gruyere.ch.

Museum HR Giger and HR Giger Bar are open year-round. The museum recently celebrated its 20th anniversary in June 2018 and also celebrated the 40th anniversary of Alien with an exhibition of behind the scenes photography, in 2019.”

HR Giger's work was featured in an exhibition at Gagosian's Park and 75th gallery in New York in November 2019. 'Alone with the Night', a major retrospective of HR Giger works opened in Mexico City in December, 2019 and a joint exhibition of the works of HR Giger and Hajime Sorayama opened in Tokyo in January 2021. For more information, visit hrgigermuseum.com or visit the museum’s Facebook page.

To experience the full article, buy Been Magazine issue #2, Spring 2019.