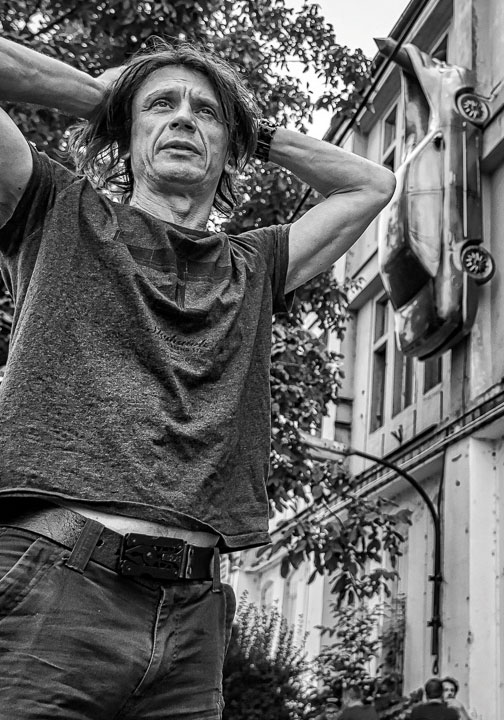 We’re sitting by the bar at MeetFactory in the decidedly untouristy district of Prague 5. Cerný rockets through the door aboard his powered unicycle, and comes to an immediate and dramatic halt at our table. I’d never seen one of those things handled so deftly before, like a natural extension to his body, but it makes perfect sense he can zoom around Prague like that. Like one of his incredible kinetic sculptures, it’s just something to be mastered.

Born in Prague in 1967, Cerný gained notoriety in 1991 by painting a Soviet tank pink. As the Monument to Soviet Tank Crews was still a national cultural monument at the time, his act of civil disobedience was considered “hooliganism” and he was briefly arrested. The ‘bad boy’ aspect of Cerný’s identity has followed him around ever since. But it didn’t start there. In the 1980s, Cerný and a group of friends formed The Stunners an outsider group of artists sick of the pretentions of the art world in Prague. They created a fabulous manifesto (over a number of beers) and engaged in magnificent creative projects all over Prague, including a wonderful episode of spontaneous art creation on the Charles Bridge. David delights in the fact that he sold one of his pieces from that event for the equivalent of ‘about a hundred beers.’

Following, I reprint an account of the ‘pink tank’ episode written by Tomáš Pospiszyl, an excerpt from The Fucking Years (2004), a fantastic history of Cerný and The Stunners’ early years creating art whenever they could and generally causing chaos wherever they went. Priceless. 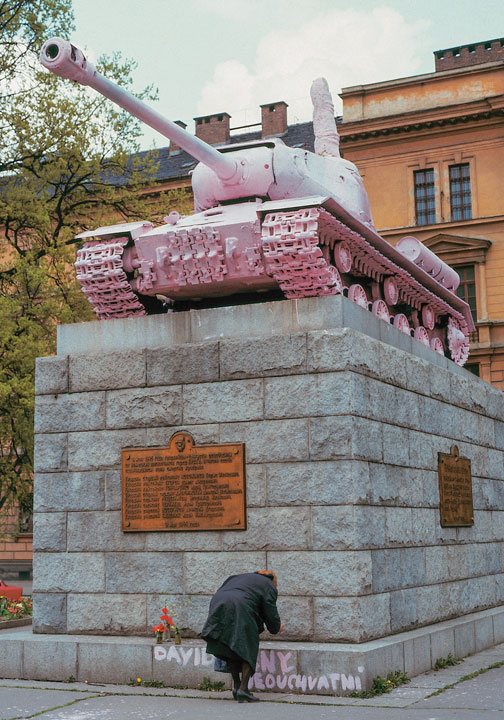 “At first I had my doubts. The tank was naturally steaming me up, but I really wasn’t sure about painting it. One just has to try, I guess.
In the end we get about fifteen people together. We decide for five in the morning while it’s still calm. To make sure, I write two letters of recommendation and approval, one from City Hall and the other from FAMU, saying that we’re shooting a film. We get up very early, it’s still dark outside.
There are so many of us that we can hardly fit on the base. Surprisingly, the painting goes very fast, the only problem we encounter is the tank’s straps.
Very shortly, the police arrive. They are suspicious, as are we. We hand them the false documents, they also want to check our IDs. I don’t give them mine. The policemen make a call from their car, it’s all taking too long. Then they scold us for not announcing the shoot in advance. We play dumb and promise that next time we’ll report everything beforehand. We quickly slap the rest of the paint on the straps and are out of there. We jump in the car, I’m nervous but David jumps out again and signs the monument. We’re finally off.
We go and wash up at a friend’s house. We’re all pink from the paint, messing up his hall. We’re euphoric. David insists that we drive by the monument on our way back even though we’re scared that it might have been cordoned off by the police. We drive by. The tank is pink and shining color in the daylight. We can finally relax a bit, adrenaline is seeping away. The sun is shining, it’s real quiet.
In the evening, we turn on the telly. It’s like a cold shower. The news reports vandals. Can’t they see that it’s art? Isn’t it signed? We don’t know what to do next. The next morning, we start our campaign. I write a statement and take it to Radio 1. We want to explain that we are not vandals, that it is art. I also write to Czech News Agency, David does not show his face much in public. He’s on the lam. I sit at home and keep writing or making phone calls. After two days, we go out properly. There are young people everywhere wearing pink ribbons. We come across a group of people in Kampa who ask us to sign a petition defending the pink tank. They admonish us when we are at first reluctant to do so. They can’t understand why we are laughing so much.
There is a permanent Hyde Park around the tank. People argue and sometimes they even start fighting. There is a concert happening when a group of Russians come and lay down a wreath. Young people are lying around on the other side of the park, small kids run hither and thither. Suddenly, there is such a strong feeling of freedom.
The army paints the tank back green again but for the majority of people it’s still pink. In the end, a group of deputies from the Federal Parliament assemble and paint the tank back pink again one afternoon. David assists them, it’s all one huge political cabaret. Maybe it was too much.
David goes and turns himself in to the police. There’s not a single day one newspaper or another doesn’t mention the pink tank. It’s a perfect metaphor for that time.
It’s all too much and people start filling it up with meaning I cannot agree with. It’s simply impossible to control a media frenzy. In the end, even the stupid tourist t-shirts appeared.” 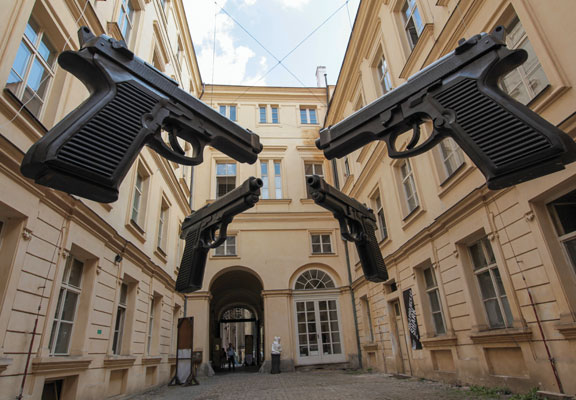 David’s works are monumental eye-candy, some so intricate and complex in nature that they required a team of engineers to put together.

At his workshop above MeetFactory, a non-profit international center for contemporary art that David founded in 2001, every inch of the huge studio space is full of mind-boggling creations in various stages of completion or storage. Legs and torsos hang from shelves. Pre-packaged full size figures stand in kit form ready to be assembled. He shows off some of his pieces with a wonderful sense of humor, always laughing inside at the art world, and poking fun at convention, politics, and the establishment all at the same time. His sculpture Entropa, created to mark the Czech presidency of the European Union Council in 2009, was controversial both for its depictions of the various EU member states, and because it was created by Cerný and friends rather than by artists from each of the member states. The whole thing was treated as a joke by Cerný, who delighted in the response, though was disappointed that the real story got out so soon. 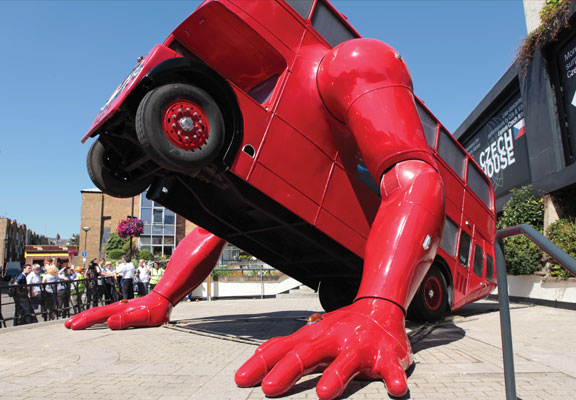 For the 2012 Summer Olympics Cerný created London Booster, a double decker bus with mechanical arms doing push-ups, a perfect metaphor for the re-energized London that played host to the games.

It’s clear he loves what he does, and has an incredible amount of projects going on at the same time, but he appears to have boundless energy and enthusiasm for everything he’s working on including current pieces for upcoming exhibitions or installations in Sydney, Tokyo, Qatar, Miami, Santa Monica and at least four or five projects in Prague itself. He also recently co-founded Black n’ Arch architecture studio – which has grown to include a dozen architects, designers and engineers – with architect and urban designer Tomáš Císar. The studio’s first completed project is called Cyber-Dog, a futuristic wine bar with a robot bartender, named Kuka.

It’s not what you’d expect in the historic town of Prague, where David suggests maybe sixty percent of the city’s residents would say they like what he’s done in the city, a win in his book, “without the haters it would be boring.”

Architecture feels like a natural extension to David’s work, which, often just by sheer scale, requires engineering and architectural work to complete. 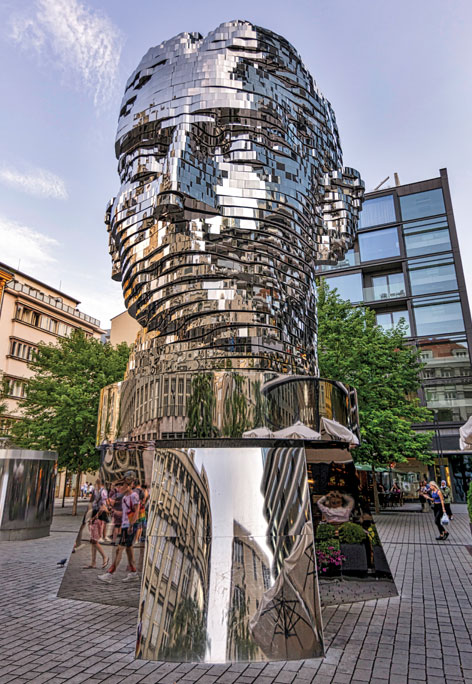 Growing up in Prague while it was a State of the Soviet Union, Cerný speaks bitterly of those times, and the lasting influence of the Russians on Prague life and politics. But that bitterness is not something seen in his art, which more often features playful surrealism than social or political commentary. Among his earlier works is a series of life-size model kits of actors, artists, critics and rock stars, all in their packaged kits, a theme that presents itself in a lot of his work. You can actually find pieces of model kits in the Cerný-created counter top at Kavárna Mlýnská, David’s favorite hangout. “As a plane lover, I built these models all the time. So I grew up with that kind of toy, it’s a nice format, the form itself as a structure which holds the artwork free form.”

David’s work has had a major impact on the art scene of Prague. Today, MeetFactory’s international artists-in-Residence program is the largest studio program in Central Europe and annually host over thirty visual artists, curators, musicians, theater directors and writers as well as regular live music events and gallery shows.

When asked about the future, whatever he’s working on, he suggests that he’ll “probably be making bigger things.”

Black n’ Arch has a number of projects in the works as well. When he isn’t working on these projects, you’ll find him rocketing around Prague on his wheel, or flying his own plane (a Cessna four-seater) to places more often than not involving his passion for scuba diving. David also alluded to, well, I’ll call it a potential underwater project. I don’t want to spoil the surprise, that’s half the delight for David, I think. 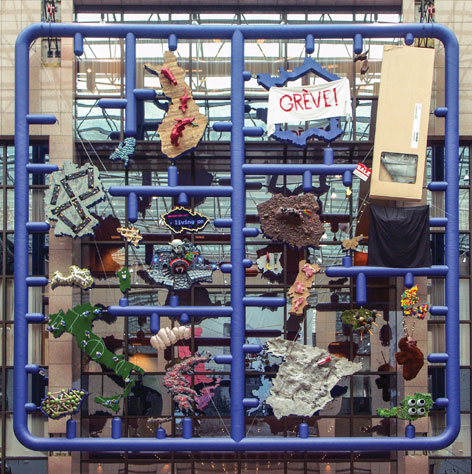 After we finished up our meeting at MeetFactory, I turned to catch David zipping out of the door, and off toward the city. This guy is non stop. It’s hard not to get caught up in his energy. Walking around Prague, it’s easy to discover his work, there’s even guide books to get you there. Go find it. And if you find David at Kavárna Mlýnská, buy him a beer from me. He’s a folk hero, a national legend, and a true creative original. I can’t wait to see what he does next.

To experience the full article, buy Been Magazine issue #2, Spring 2019.